Total U.S. crude oil production next year is on track to reach 9.3 million barrels per day—the highest level since 1972! The United States is now the biggest oil producer in the world, overtaking Saudi Arabia and Russia. Crude oil output will continue to surge and will top 13.1 million barrels a day by 2019. 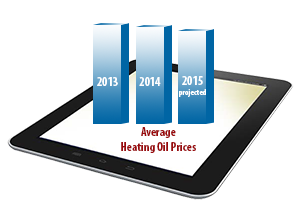 While this represents a giant leap toward our country’s goal of greater energy independence, it remains to be seen how oil prices will play out in the years ahead due to unpredictable factors including:

Speculation also injects price uncertainty. Speculators from giant banks, hedge funds and elsewhere place bets on which way the energy markets will move, hoping to make money from their investments. With unrest in the Middle East reaching the boiling point recently, speculators are especially jittery, which opens the door to future price volatility.

Unfortunately, everyone gets caught in the whipsaw effect of increased costs and uncertainty. It hits you—and us—in the wallet and has many other consequences.

Like you, we hope to see oil prices stay at lower levels in the future. With domestic oil production levels surging strongly, there is a better chance that this might happen.

Thanks in large part to the big boost in domestic supply, oil prices are expected to remain at levels that are similar to, if not slightly lower than last heating season—barring any unexpected world events.