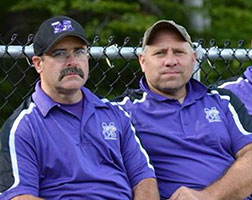 When Todd Leach and Dana Tobey aren’t helping customers, you may find them on the sidelines coaching football and lacrosse.

The people who work at P. Gagnon & Son are the best in the business because they care about making sure that we exceed your expectations. They also care about our community. As a local family-run business, we are more than just a fuel company; we are your neighbors.

Our service team includes Todd Leach, who has been with us for 24 years. As a driver, he meets new people every day and he says he enjoys not sitting at a desk. He is also a member of the South Berwick Volunteer Fire Department and was a longtime coach for his son’s lacrosse and football teams.

Technician Dana Tobey recently rejoined the team after some years of running his own business. Based here in South Berwick, he too spent many years coaching his son’s football and lacrosse teams. He enjoys the experienced team at P. Gagnon & Son, and the variety of problems he solves every day.

Todd and Dana are lifelong friends; their sons are freshman at Marshwood High School.