I started working here at P. Gagnon and Son with my dad in 1989. December of that year became sort of a legendary time period in this industry because of the extreme cold that began the day before Thanksgiving and ran straight through into January. It was “all hands on deck” day after day for the whole month. Several of our current employees were with us then and every one of them remember December of ’89 vividly.

Well, it took 26 years but a new legend has been born. February of 2015 is the new king of the rugged weather months. Snow like we’ve never seen and extreme below-normal cold challenged us like never before. It is with a huge amount of pride that I’m able to tell you that our team of office folks, delivery drivers and heating technicians stepped up to the plate and took great care of our customers day after day after day.

Think of it this way. February was 37% colder in Portsmouth than the 30-year average. That basically means that our folks delivered about a third more heating oil and propane than in a normal busy February. About an additional 10 days’ worth of deliveries were done in the month’s four weeks. All in the extreme cold while often wading in snow up to their belt loops. The pictures here of Bruce Goodwin and Phil Amato pretty much sum it up. Great job, guys! 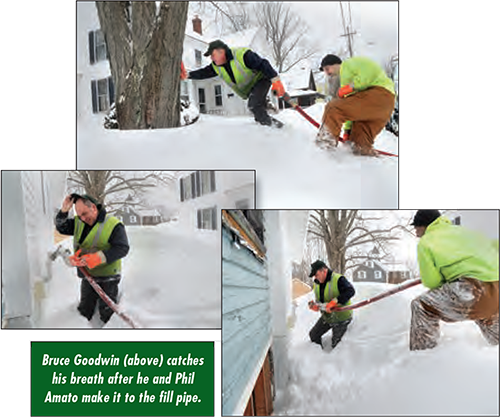 During the month we heard from an alarming number of noncustomers who told us that they were running out of oil and “their oil company” wouldn’t come out. We actually heard from one person who was told they couldn’t get a delivery for two weeks. When our responsibility to our loyal customers allowed it, we were able to help some of them out. The snow slowed us down a bit but P. Gagnon and Son customers were taken care of.

Last February was unlike anything anyone here has ever experienced. We would all be OK to never have to do it again. But if we do, we will be ready. You can count on the people of P. Gagnon and Son to take care of you for many winters to come.